As large automakers like Ford and General Motors signal a future free from the combustion engine, more startups developing electric-vehicle technology could come into play as acquisition targets in the near future.

Companies developing technology to address “core capabilities” that allow legacy automakers to transition to EV faster, like wireless charging and battery technology, will be among the most attractive targets for acquisitions, according to Brian Walsh, head of WIND Ventures, the corporate venture capital arm of Chilean energy company Copec.

“It makes sense that we’ll see more acquisitions — small and large — frankly, and some consolidation within the sector, as well,” Walsh said in an interview. “And it’s all in the objective of them transitioning a large organization as quickly as they can.”

Both Ford and GM have said they’ll spend billions to pivot to an EV-led future, with Ford announcing earlier this month that it plans to invest $29 billion into electric vehicle technology through 2025, and GM saying in late January it will transition its entire vehicle fleet to battery power by 2035.

The announcements come on the heels of government regulatory efforts to incentivize electric vehicles over gas-powered cars. California, for example, introduced a mandate that all new cars sold in the state must be zero-emission by 2035. Norway and the U.K. have also introduced similar mandates.

Legacy car companies have already started introducing their plans for electric vehicles, which is why acquisitions of startups in the EV space will likely be around technology, according to Ram Chandrasekaran, a principal analyst for transportation and mobility at energy research and consultancy firm Wood Mackenzie.

Acquiring another company that makes an EV platform wouldn’t make sense, but “what they want to acquire is the technology that goes into that platform,” he added.

EV battery technology in particular will be an area of interest, and battery and software technology is where startup investment will likely go as well, according to Chandrasekaran.

Global investment in electric-vehicle startups this year is also off to a strong start, with funding reaching $3.7 billion in just the first few weeks of 2021, according to Crunchbase data. A large part of that is from electric truck- and SUV-maker Rivian’s $2.7 billion private-equity round in January. The company is also reportedly considering an IPO later this year.

All told, venture-backed EV companies around the world raised nearly $7.8 billion in funding in 2020, Crunchbase data shows. And of the 10 largest funding rounds of 2020, two of them were electric vehicle companies: Rivian’s $2.5 billion private-equity round and WM Motor’s $1.5 billion Series D.

The past couple of years have been record-breaking in terms of investment in the electric-vehicle space, but industry watchers say the groundwork was laid decades ago.

Interest in the EV industry started back in the 1990s when California introduced a zero-emission mandate. The state requires car companies to produce a minimum number of zero-emission vehicles or be subject to a $5,000 fine for every vehicle they didn’t produce, according to Scott Hardman, a professional researcher at UC Davis’ Plug-in Hybrid & Electric Vehicle Research Center.

Tesla benefited “immensely” from the mandate, Hardman said, as the company didn’t produce any gas-powered cars and could sell its credits to other car companies.

It took a large market like California to crack down on emissions to kickstart electric-vehicle production, Hardman said. Other places followed: China also introduced similar rules and Europe set CO2 emissions regulations that were difficult to meet without selling electric vehicles.

But when the EV market was revving up between 2008 and 2012, most automakers weren’t taking it seriously and appeared skeptical, Hardman said. That has changed in the past few years, most recently with the commitments to battery-powered cars made by Ford and GM.

Those commitments by legacy automakers are about survival, Hardman said. “They want to be competitive, they want to have staying power. Maybe they’re trying to attract investors who are interested in electric vehicles.”

And with regulations to curb the sale of new gas-powered vehicles, existing car companies don’t have a choice but to adapt to survive, so new car companies will be wise to focus on EV as well.

“You’d be kind of crazy to start a company producing gas cars right now,” Hardman said. “You’re not going to have much longevity … this is the future.”

Dan Ives, managing director of equity research at Wedbush Securities, expressed a similar sentiment in an analyst note last week, writing that “a golden age of EV is on the horizon.”

He said that while electric vehicles today make up only 3 percent of global auto sales, that figure could reach 5 percent by the end of this year, and 10 percent by 2025. The market could grow into the trillions of dollars over the next 10 years, he said.

“There has been a massive appetite in the market for EV stocks led by Tesla over the past year as the demand trajectory for the EV sector continues to move markedly higher,” Ives wrote.

So far, Tesla has been the leader in the electric-vehicle category, and that likely won’t change in the near future, due to the brand awareness and battery tech lead the company enjoys, Ives wrote.

Going to the public markets via a special purpose acquisition company, or SPAC, has become increasingly popular over the last year. These blank-check companies also give EV and charging infrastructure companies the opportunity to get cash and scale, according to ChargeNet CEO Tosh Dutt. His company, an early-stage startup, makes a software platform that integrates EV fast chargers, energy storage and solar power with a payment system.

Several vehicle companies, like Nikola Motor and QuantumScape, have already gone public via SPAC deals, and others, such as Lightning eMotors and ChargePoint are expected to merge with blank-check companies in the future.

Dutt pointed to the spree of solar company acquisitions in the late 2000s and early 2010s, and expects a similar phenomenon with EV startups.

“In terms of acquisitions, in M&A, a lot of the sort of early-stage EV technology companies like mine have either been acquired by large energy companies, mostly, or oil and gas companies like Shell or BP, or have large investments in them,” he said. “I think that being able to acquire that technology to help those larger companies transition is a lot easier than trying to create that IP themselves.”

While consumer demand and investor interest in electric vehicles has increased, it hasn’t reached critical mass yet, according to Hardman, the UC Davis researcher. The early adopters of electric vehicles were people who were always enthusiastic about the concept, he said, but as EVs move into the mainstream market, the challenge is getting everyone else excited about them.

“What is going to be difficult is moving toward the mass-market, where you have more people living in apartments and condos … ensuring they have access to charging,” Hardman said. “That’s going to be a challenge in the future and something we need to address.”

This article was originally published on https://news.crunchbase.com/news/electric-vehicle-startups-tech-acquisitions/?utm_source=cb_daily&utm_medium=email&utm_campaign=20210212&utm_content=intro&utm_term=content 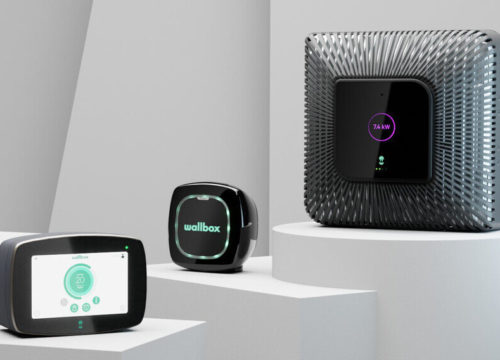 Spanish startup Wallbox builds chargers for homes, car parks and on public highways — and is ready to take on the US.