75F, a Burnsville, Minnesota-based startup providing AI-powered building management technologies, today announced that it raised a $4.75 million extension to its $18 million series A, bringing its total raised to $29.2 million. The company plans to use the funds to further expand innovations in energy savings and market reach.

Commercial buildings are the fourth-leading contributor to greenhouse gas emissions globally, at 20% of emissions around the world. Roughly half of their emissions is from heating and cooling, with HVAC and lighting accounting for 65%. Building inefficiency will remain an important emissions target — the world’s building footprint is expected to grow by 2.5 trillion square feet by 2060, which equates to building another New York City every month for the next 40 years. That’s why at least 31 U.S. metros have passed laws establishing power benchmarks or reporting mandates, with 15 requiring energy performance targets.

75F, which was founded in 2012, offers an AI-powered, internet of things-based building platform that includes wireless sensors, equipment controllers, and cloud-based mobile and web apps that deliver analytics and predictive, proactive building automation. The company’s system aims to reduce energy costs by taking advantage of outside air to provide free cooling, tracking factors like weather and room occupancy to learn the behavior of building occupants.

According to 75F, its system supports both old and new buildings, with autonomous controls that work with a range of heating and cooling equipment like rooftop units, boilers, and single-stage equipment. When active, 75F says the platform can anticipate things like restaurant rush hour and start cooling the kitchen down, or dim the office lights when the sun is out. Moreover, it lets managers remotely adjust, monitor, or schedule temperature changes and add zones to existing HVAC equipment, which tenants and employees can control via their phones.

“75F’s full-stack, simple, yet low-cost building automation solution is the next-generation of building automation systems. Today, most building automation solutions in existence are cost-effective for only the largest, most sophisticated buildings, which represent a very small percentage of all buildings globally,” Brian Walsh, head of Wind Ventures, the lead investor in 75F’s funding extension, said in a press release. “For emerging regions like Latin America, the 75F product-market fit represents a leapfrog opportunity for most of the market from small to very large, so we are excited to work with the team to bring the 75F solution into the region.”

Utility-optimizing AI is a burgeoning business, with plenty of competition to go around. There’s BrainBox and Aquicore, whose algorithms make fine-grained adjustments to HVAC systems on the fly. Augury, a startup developing sensors that attach to machines and record data that’s then analyzed in the cloud, works with service companies to diagnose and optimize systems like industrial HVAC. GE Digital’s Predix and startup Petasense offer similar Wi-Fi-enabled, cloud- and AI-driven monitoring sensors. And Sidewalk Labs and Carbon Relay boast products that leverage sensor data to make predictions about datacenters’ cooling usage.

But 117-employee 75F, which previously raised $2 million in a June 2018 seed round, uniquely claims its system can reduce energy costs by 50%. Lower installation costs, “digital twin” technology that leads to faster data ingestion, and sensors designed in-house result in a payback period of less than 2 years for most customers, according to 75F.

“Since the pandemic began last year, occupancy in commercial buildings has been low or nonexistent. While the commercial buildings industry struggles with the pandemic in obvious ways, COVID-19 has highlighted how existing building technology can help make spaces healthier and save energy that would have otherwise been wasted,” a spokesperson told VentureBeat via email. “Because 75F’s control capabilities are so agile, we were able to develop and deploy a custom control sequence called Epidemic Mode that automates expert ventilation recommendations.”

While 75F says that only 10% of revenue from its customers is recurring today, it hopes to fill 45 positions in the coming months across its offices in Minneapolis, Singapore, and India. The company says that some of the funding will be set aside for an OEM relationship not yet publicly disclosed.

This article was originally published on https://venturebeat.com/2021/03/23/75f-an-ai-powered-hvac-management-startup-nabs-4-75m/ 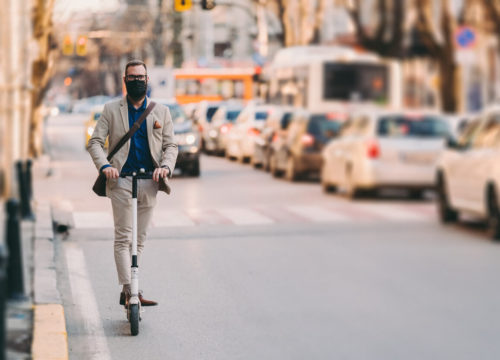 Mobility Data: We Can’t Get There From Here, Or Can We?

Traffic congestion is a problem in cities all over the world. Globally, Moscow has the worst traffic, with drivers spending on average 210 hours in traffic annually, according to a 2019 report. Americans also suffer and waste time in traffic. Boston (164 hours lost due to congestion) and Washington, D.C., (155 hours) ranked as the most congested cities in the United States.